Wellshill Cemetery opened in 1844, outside the city centre to the west. Over the years it was extended, and then renamed Jeanfield and Wellshill Cemetery after a large new section was added upon what was Jeanfield Recreation Ground. Today we care for some 570 war graves here. Over 350 are of Polish soldiers, sailors and airmen of the Second World War.

Find the casualties in this cemetery

Today, we care for some 570 war graves here. During the First World War, Perth Infirmary, containing 100 beds, became Perth War Hospital and by 1917 four auxiliary hospitals were operating in Perth as well. Many of the patients admitted to this hospital who died during the war were laid to rest in this cemetery. In addition, over 90 Commonwealth servicemen of the First World War were laid to rest here privately and their graves are scattered across the cemetery.

About one-third of the 1914-1918 war burials still bear the grave marker chosen at the time, rather than a CWGC headstone. Four were members of Canadian units, including Private Andrews of Nova Scotia, who served with the Canadian Forestry Corps. Experienced woodsman were recruited from Canada to fell Scottish trees for the war effort during both world wars. Andrews died in the second wave of the great influenza pandemic of 1918-1920 - the ‘Spanish flu’ - which killed many servicemen and women in Britain and around the world as the war was coming to an end. 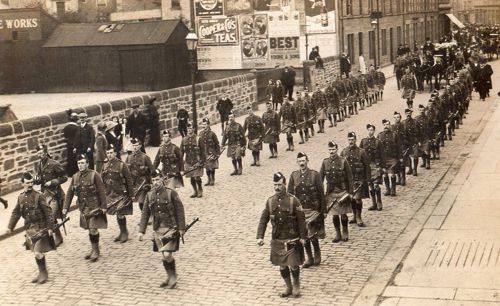 Over 350 of the 570 war graves at this site are of Polish soldiers, sailors and airmen of the Second World War. Prior to the Second World War, the British and Polish governments had drawn up an agreement for military and naval cooperation. After the fall of France in the summer of 1940, men of the Polish armed forces who had been fighting in Europe reformed in the United Kingdom, predominantly in Scotland, going on to make a significant contribution to the war effort. There was a real fear that Germany would launch an invasion of Scotland from its bases in Norway and extra troops were urgently needed, so the Polish soldiers were warmly welcomed. 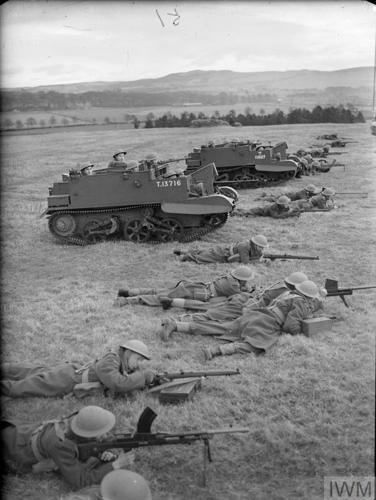 An infantry unit of the 1st Polish Corps in action during a training exercise in Perth, 22 November 1940 © IWM H 5658

By the spring of 1941 they were responsible for protecting the eastern seaboard and, by March 1944, it was estimated that almost 200,000 Polish servicemen were fighting under British command. They fought with distinction on land, in the air and at sea, while the Polish Merchant Navy provided ships and men for the vital Allied convoy effort. 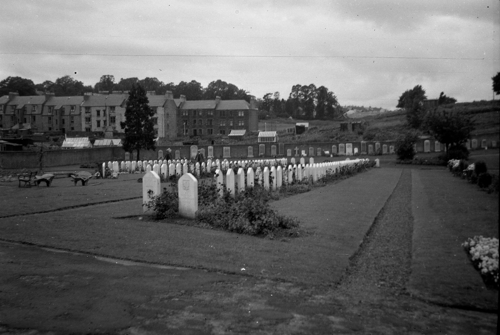 During the early months of the Second World War, local authorities set aside a special section in the Jeanfield Division, opposite the Jeanfield Road entrance, for Commonwealth and Allied war graves.

In September 1940, the Polish authorities in Scotland requested a dedicated and consecrated space for the burial of members of their forces as there were substantial numbers of Polish troops based in Perthshire, including a Polish Reconnaissance Battalion which had been established in Perth by February 1942.

Today, half of all Polish war burials in Scotland are here in this cemetery, the earliest dating from November 1940 and the last from October 1947. Each of these is marked with a Polish headstone – which is distinctive from the typical Commission headstone by its pointed tip and the Polish eagle emblem on the face of the headstone. Many of the burials are of men who died after the war ended, as the Polish forces were not officially disbanded until July 1948 and the Polish Resettlement Corps functioned until 1949. Lieutenant Colonel Karol Gwido Langer, Chief of the Polish General Staff’s Cipher Bureau and a Polish code-breaker during the war, was originally buried here in 1948, but his body was exhumed in 2010 for reburial in Poland with full military honours. 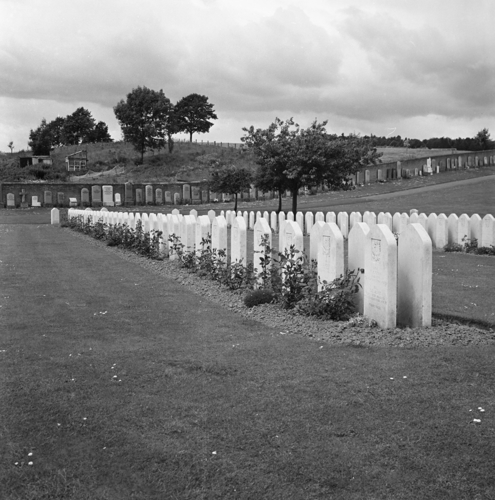 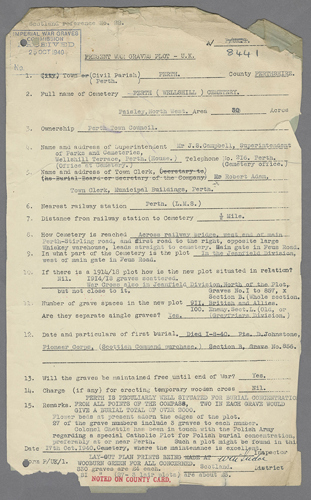 Report on cemetery by IWGC Area Inspector William McIndoe, referencing conversations between the IWGC Assistant Secretary Major H.F. Chettle and the Polish Army concerning the establishment of a separate plot in the cemetery for Polish burials, 17th October 1940 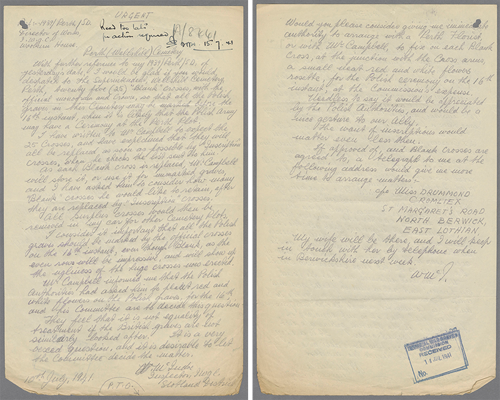 Letter from IWGC Area Inspector William McIndoe requesting the urgent dispatch of temporary wooden crosses to mark Polish graves in the cemetery and advising that the Polish military authorities have requested the planting of red and white flowers on the graves, 10th July 1941 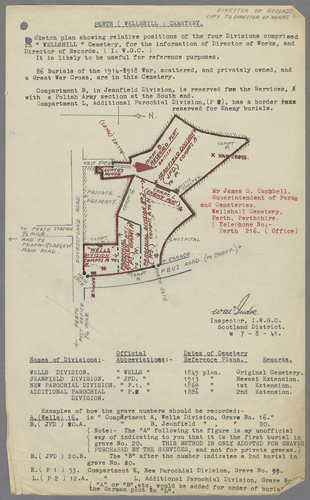 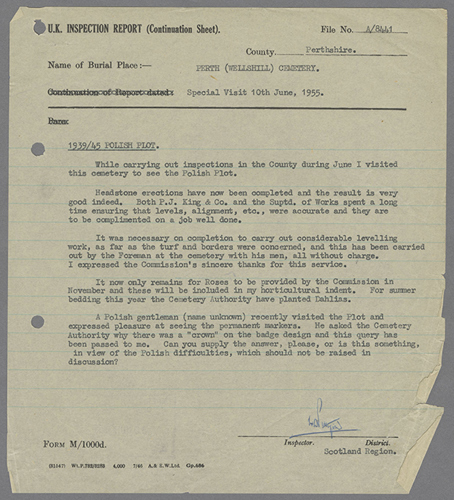 Report by IWGC District Inspector William Pettigrew on special visit paid to the cemetery following the erection of the permanent headstones on the Polish plot, 10th June 1955 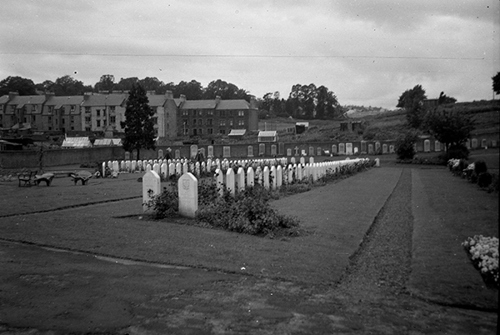 <p>The cemetery is on the west side of Perth outside the city centre. By road the main entrance is on Jeanfield Road on the right-hand side. There is a bus stop close to the cemetery entrance. Buses are available from Perth city centre or the cemetery is a ten-minute taxi journey from Perth railway station.</p>
Lyness (Royal Naval) Cemetery