Remembering the revolutionary Battle of Cambrai 105 years on

105 years ago, a battle that changed the face of modern warfare raged across northern France. This is the story of the Battle of Cambrai.

The Battle of Cambrai 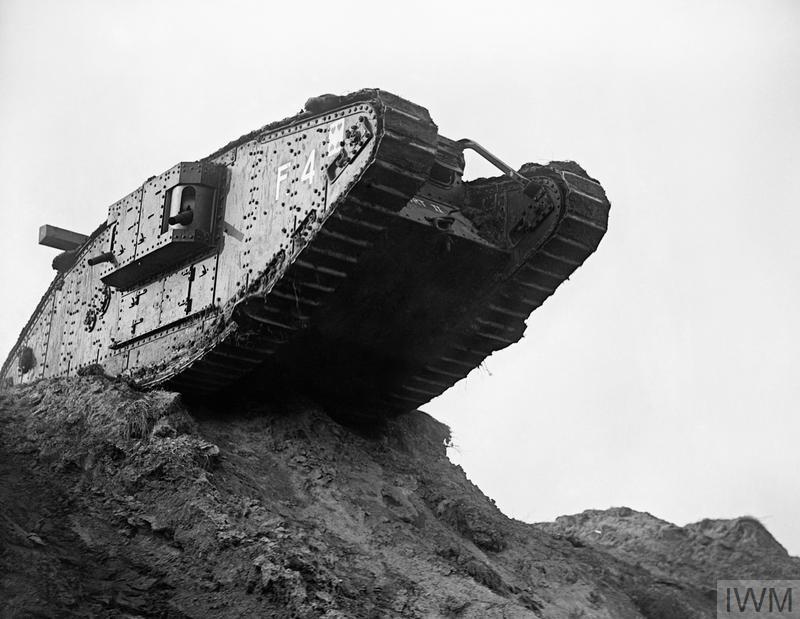 At 6.20 am on 20 November 1917, British Empire forces launched an attack against the formidable German defences at Cambrai. They achieved a stunning success and church bells rang in celebration, but it was to prove short-lived.

German reinforcements were rushed in, and on 30 November they launched fierce counterattacks, driving the British Army back towards its starting lines.

By the end of the battle in early December 1917, more than 80,000 servicemen on both sides were dead, wounded or missing.

Best known today for the role played by tanks, Cambrai saw infantry, aircraft, artillery and even cavalry working together in new ways. These technological and tactical innovations would eventually prove decisive on the Western Front.

Today, the cemeteries of the CWGC are lasting monuments to those who fought and died here.

Prelude to Cambrai: development of the tank 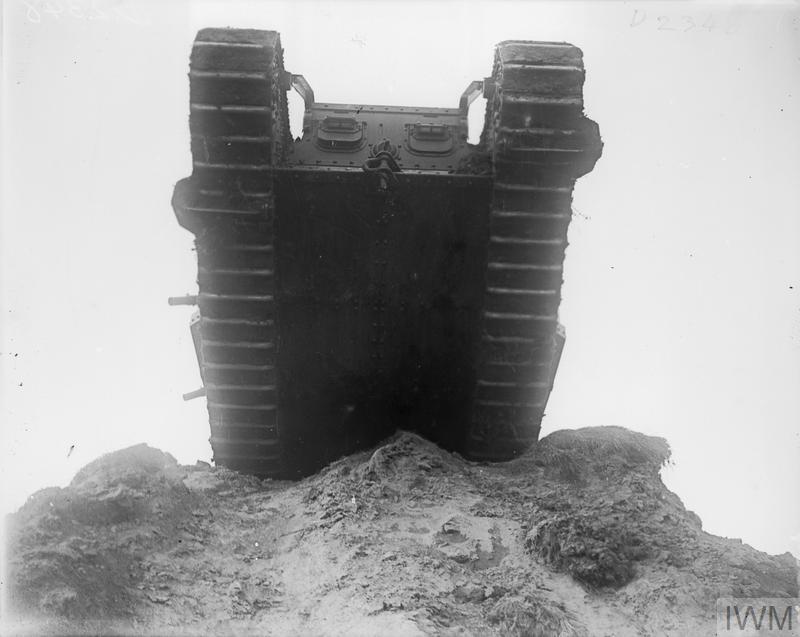 A tank roars over a trench, a site that would become familiar on battlefields after Cambrai (Image: © IWM Q 6284)

In September 1916, during the Battle of the Somme, the British Army used a new weapon.

The ‘land ship’ was designed to crush barbed wire and traverse the killing ground between the front lines. It soon became known by its code name: ‘tank’.

It was hoped that tanks would break the deadlock of trench warfare on the Western Front, but their impact in 1916 and 1917 had been limited. They were slow, mechanically unreliable, often became bogged down in mud, and crews had to endure terrible heat and fumes.

In August 1917, the commander of the newly formed Tank Corps, Brigadier General Hugh Elles, proposed an operation to prove the ability of his tanks.

He suggested an assault across the gently rolling chalk plains of Picardy, near the French town and important railway hub of Cambrai. There had been little fighting here and the ground was not broken up by thousands of muddy shell holes.

The Imperial German Army had heavily fortified the area and did not expect an attack. Their troops here included understrength units recovering from fighting elsewhere on the Western Front.

To support the British tank attack, artillery guns would fire a brief but highly accurate and ferocious bombardment moments before the assault.

This would preserve the good ground conditions and, crucially, the element of surprise.

In great secrecy, and under the cover of darkness, nearly 500 tanks, 1,000 guns, eight infantry and five cavalry divisions were massed at Cambrai. They included units from across Great Britain and the Empire: from Yorkshire and Scotland to Newfoundland and India.

The Battle: Combined arms in effect

Thick fog had settled over the lines and German lookouts had no warning of the impending attack.

At zero hour, the British guns opened fire and the tanks advanced. Brigadier General Elles led the attack himself from his tank, named Hilda, flying the new green, red and brown flag of the Tank Corps, designed by Elles himself. 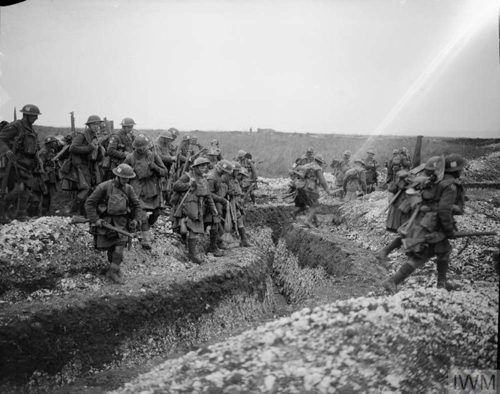 The German front line was quickly overrun, and the tanks continued on, punching deep into the German defences.

As they reached the Flesquières ridge, at the heart of the battlefield, the fog began to clear. German gunners had been trained to engage tanks, and they began to methodically target and destroy the slow machines.

Nevertheless, the attack was successful and, east of Flesquières, British troops broke through all the German defences. It was an advance of some five miles, an achievement not seen since the early stages of the war. Church bells were rung in Britain in celebration.

The cost of success had been high. Almost half of the attacking tanks had been lost, and the cavalry had failed to push on through the break in the German lines. Further advances were made over the following days, with the important positions at Bourlon Wood briefly captured on 27 November.

Fresh German reinforcements were now flooding into the area, including aircraft of the ‘Flying Circus’, the fearsome fighter wing led by Manfred Von Richthofen, the ‘Red Baron’. On 28 November, with German resistance stiffening, and the British Army occupying a ‘salient’ of exposed positions deep into enemy territory, the attack was closed down.

On 30 November, the Germans counter-attacked. Using their own innovative infantry tactics, German ‘stormtroopers’ infiltrated British lines, bypassing strong points. Many of the hard-won British gains were lost and British units suffered heavy losses fighting desperately to hold back the tide.

Finally, on 6 December, the battle was brought to a close, both sides exhausted by the ferocity of the fighting.

The Battle of Cambrai was a brief and bloody engagement, with more than 80,000 servicemen from both sides wounded, missing, or killed.

The attack had ultimately achieved little for the British Army, but it had demonstrated the shape of the fighting to come.

Aircraft, infantry, artillery, and tanks, all working together in a ‘combined arms’ operation had proved that even the strongest defences could be broken. 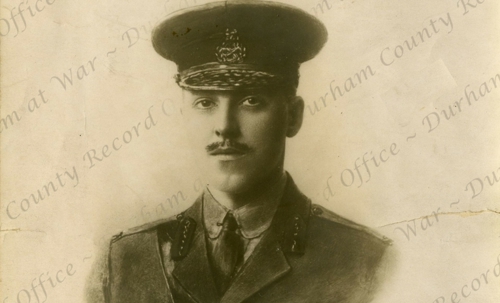 Brigadier-General Roland Boys Bradford had a meteoric rise during a bright but brief military career.

The charming, good-looking officer started his career in the Territorial Army in 1910 before transferring to the 2nd Battalion of the Durham Light Infantry (DLI) two years later.

With the DLI, Roland was part of the British Expeditionary Force, landing in France in September 1914. Innate leadership skills and prodigious military abilities took the young Roland to the rank of Captain by 1915, earning him the Military Cross along the way.

By 1916, Roland had been promoted to Major and was transferred to the 1st/9th DLI Battalion. By August of that year, he was commanding the battalion. Over three years of fighting, Roland had achieved the rank of Lieutenant-Colonel. He was just 24 years old.

Perhaps Roland’s finest hour came during the gruelling Battle of the Somme. On 1 October 1916, Roland and his men were embroiled in action around Eaucourt l’Abbaye. During this engagement, Roland would earn further acclaim and the UK’s highest military honour: the Victoria Cross.

His VC citation, as published in the London Gazette, reads:

"For most conspicuous bravery and good leadership in attack, whereby he saved the situation on the right flank of his Brigade and of the Division. Lieutenant-Colonel Bradford's Battalion was in support. A leading Battalion having suffered very severe casualties, and the Commander wounded, its flank became dangerously exposed at close quarters to the enemy.

Raked by machine-gun fire, the situation of the Battalion was critical. At the request of the wounded Commander, Lieutenant-Colonel Bradford asked permission to command the exposed Battalion in addition to his own. Permission granted, he at once proceeded to the foremost lines. By his fearless energy under fire of all description, and his skilful leadership of the two Battalions, regardless of all danger, he succeeded in rallying the attack, captured and defended the objective, and so secured the flank."

King George V presented Roland with his medal in a ceremony at Hyde Park on 2 June 1917. Roland was quickly back at the front. While there, he ordered his men to sing the hymn Abide with Me every evening, with the song remaining the DLI’s official regimental hymn to this day.

Roland’s rise to the top was marked by his appointment as commander of the 186 Brigade, 62nd (2nd West Riding) Division. He was appointed Brigadier-General at an astonishing 25 years old.

This sparkling military career was cut short at Cambrai. Roland was killed on 30 November 1917, the youngest person to ever hold Brigadier-General rank or higher in the British Army.

Upon hearing the news, the 1st/9th Battalion of the DLI sang their traditional hymn in remembrance of their young commander. 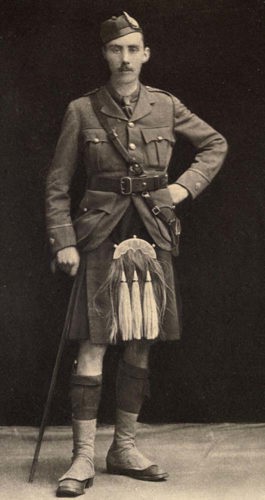 Brighton-born Ewart Alan Mackintosh was a gifted wordsmith and devotee of the written word.

The future war poet also bore a keen interest in his Scottish heritage, learning how to speak Gaelic and how to play the bagpipes during his time at Oxford University. As his name suggests, Ewart was the son of a Scotsman, despite being raised in southern England.

He even ended up serving in a Scottish regiment during World War One. After initially being turned away from military service for bad eyesight, Ewart applied to the university Officer Training Corps and was commissioned in the 1st/5th Seaforth Highlanders towards the end of 1914.

By 1915, Ewart was in France, serving as his battalion’s bombing officer.

The 51st (Highland) Division, of which the Seaforth Highlanders were a part, was engaged in trench warfare north of Arras, France, in March 1916. Here, Ewart would perform a daring raid on enemy lines, where several of his men were wounded.

Ewart, risking life and limb, attempted to carry two badly wounded comrades back to British trenches but the pair sadly succumbed to their injuries. Ewart was awarded the Military Cross for his bravery.

The action inspired his famous war poem In Memoriam. See below for a small extract:

Oh, never will I forget you,

My men that trusted me,

More my sons than your fathers’,

For they could only see

And the young men in their pride.

Ewart was wounded during the Battle of the Somme and was sent to England to convalesce. While at home, Ewart struck up a relationship and was ultimately engaged to Sylvia Marsh, a Voluntary Aid Nurse.

Their marriage would never come to pass.

Ewart was bank on the frontlines by October 1917, in time for the Battle of Cambrai. On the second day of the battle, Ewart was killed. He is buried at Orival Wood Cemetery.

The Cambrai Memorial is a focal point for the commemoration of the Battle of Cambrai. It bears the names of more than 7,000 British and South African servicemen who died in November and December 1917 but have no known grave.

Flesquieres Hill British Cemetery is the final resting place of 900 servicemen, and more than a third remain unidentified. The village of Flesquieres was at the heart of the Cambrai battlefields. Many buried here are known to have died during the fighting for Cambrai in 1917.

Orival Wood Cemetery was begun in November 1917. This intimate cemetery is the final resting place of more than 200 soldiers who died during the Battle of Cambrai in 1917.

Hermies Hill British Cemetery is the final resting place of more than 1,000 British, Australian, Canadian and New Zealand servicemen. The village of Hermies was just behind the British start lines during the Battle of Cambrai.

To discover more stories of those we commemorate and our cemeteries and memorials, don’t forget to check out our search tools.

Find War Dead lets you access our entire casualty database. If you’re tracking down a loved one or want to learn more about regimental history, this is the place to start.

Interested in visiting one of our sites? Use our Find Cemeteries & Memorials tool to discover where you will find CWGC war graves and how to get there.