Not long after the outbreak of the Second World War, two large areas were set aside for the burial of service personnel in the newly established Blacon Cemetery. By the end of the war more than 450 servicemen and women had been laid to rest here.

Chester (Blacon) Cemetery is just over a mile northwest of Chester city centre. Amongst the several thousand civilian burials are over 450 Commonwealth war graves of the Second World War and almost 100 servicemen of other nations. All six of our member governments are represented here, as are the Netherlands, Poland, Russia, Italy and Germany.  These graves attest to the diverse and international nature of service and sacrifice during the Second World War.

The Blacon War Cemetery plots set aside for service burials early in the war remained largely unused until mid-1943 when the larger of the two plots, plot A, was designated as one of six Royal Air Force Regional Cemeteries and the Air Ministry ordered that all Dominion air force dead were to be buried into one of these, unless they had family resident in the UK who wished to arrange private interment. Just under 400 of those we commemorate here today are air force dead, over 191 of them from the Royal Canadian Air Force alone.

Find out about the casualties commemorated here

Many of the airmen commemorated here died in crashes caused by poor weather on training exercises or operational flights, or through enemy action over British territory during the Second World War. They represent the many kinds of service within the air forces, including night fighter squadrons protecting British cities, Coastal Command planes patrolling for U-boats, Pathfinder crews who marked targets in occupied Europe for the ‘heavies’ of Bomber Command, meteorological and reconnaissance work, and the ground staff who supported it all. Close to 400 service men and women of the air services were laid to rest in Plot A; almost half of these served with the Royal Canadian Air Force (RCAF). After the war, the Ontario Horticultural Association sent several maple trees, which symbol of which appears on the Canadian flag, to be planted by the CWGC in Chester (Blacon) Cemetery. 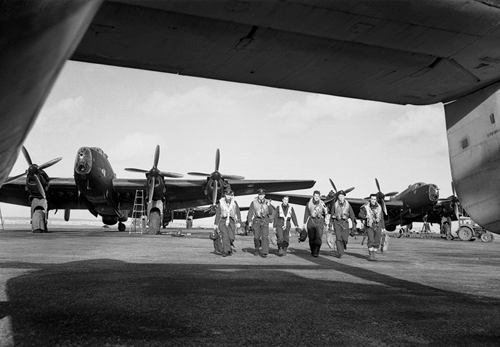 Others commemorated here came from across the Commonwealth and beyond. Service personnel buried here have connections with Austria, New Zealand, Newfoundland, the West Indies, the Irish Republic, Mauritius, Southern Rhodesia, South Africa, as well as France, Chile, and the United States. Among these casualties is 22-year-old Flight Officer Claude Wilcox (Sec. A. Grave 948.), whose parents lived in Fort Meade, Florida, USA. Claude travelled to Canada in order to enlist in the RCAF and was killed during a training flight in July 1943.

The smaller of the two plots, Plot H, is the final resting place of 51 men and women of the British Army, including two members of the African Pioneer Corps.  Among the usual Commission headstones can be found a great many other designs, denoting the graves of one Dutch, two German, four Italian, four Soviet Union and 86 Polish servicemen. In addition, the graves of 30 servicemen of the Polish Resettlement Corps lie here. After the war, many thousands of Polish servicemen and refugees did not wish to return to their homeland under post-war Communist rule, and the Resettlement Corps was created to assist troops in the transition to civilian life in the UK. There were several resettlement camps between Chester, Northwich and Nantwich, and those who died in camp or in hospitals in the area were interred here.

While almost all of the 461 war graves in the cemetery are in either of these plots, white Portland Commission headstones can be found dotted about the civilian sections of the cemetery, marking the graves of servicemen buried in private plots – many with familial connections to Blacon and Chester.