Stratford-upon-Avon Cemetery is the final resting place of almost 160 Commonwealth casualties of the World Wars. 22 of these graves are of servicemen of the First World War, and a further 137 are of the Second World War, many of them Canadian airmen who died while serving with 22 Operational Training Unit which was stationed nearby.

Of the Second World War servicemen, 97 served with the Royal Canadian Air Force (RCAF), and many of these men died while serving with 22 Operational Training Unit which was stationed at the nearby Wellesbourne Mountford Airfield. The cemetery also contains 14 war graves of other nationalities: four Allied Czechoslovakian Army servicemen, and four German and six Italian servicemen who died while prisoners of war in one of the many prisoners of war camps in the area.

By the 1880’s, the parish churchyard at Holy Trinity was almost full and so in 1881 the local authority established Stratford-upon-Avon Cemetery. During the First World War, 22 Commonwealth servicemen were buried in the cemetery, many of them having died in the nearby Voluntary Aid Detachment hospital at Clopton House. Most of these men died in training accidents, or of sickness and disease but some died from wounds received on the battlefield, such as Private Albert Donnolly. Albert served with the Royal Fusiliers and died on 31 October 1916 having been wounded six weeks earlier during the Somme. The graves of his First World War comrades can be found throughout the cemetery. 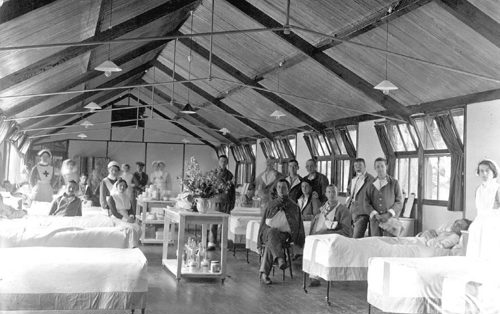 Staff and patients on a ward at Clopton House war hospital, Stratford-upon-Avon, 1917 - Reproduced from the “Our Warwickshire” website © Warwickshire County Record Office

In 1939, Stratford Borough Council set aside land specifically for future war graves and during the Second World War 137 service personnel were buried here, mainly airmen of the Royal Canadian Air Force. The cemetery also contains 14 war graves of other nationalities, four of whom are Allied servicemen of the Czechoslovakian Army. There are also four German and six Italian servicemen who died at one of the many prisoners of war camps in the area, including one located at nearby Wellesbourne. In recognition of the high proportion of Canadian airmen buried in the cemetery, the Cross of Sacrifice was unveiled in 1949 by the High Commissioner for Canada and the maple trees which line the bank of the sunken garden within the cemetery were sent as a gift from Canada by the Ontario Horticultural Association.

The majority of the airmen buried in this cemetery lost their lives flying from local airfields while training with 22 Operational Training Unit (OTU), Bomber Command, which was based at RAF Wellesbourne Mountford, and two satellite airfields at Gaydon and Atherstone on Stour.  22 OTU trained aircrews for night bomber operations, and from April 1941 to July 1945, some 9,000 airmen completed their eight weeks’ intensive training with the unit, going on to serve with operational squadrons at home and overseas.

In 1942, 22 OTU sent Wellingtons, crewed by instructors and senior students, to take part in the first ‘Thousand Bomber’ raids on German targets, including the very first on Cologne.  22 OTU suffered its first casualties in June 1941, and by the end of the war almost 300 airmen had died on operations and in training accidents.

Two of those who lost their lives in training accidents were Flight Sergeant Robert James and Sergeant Russell Causier. Born a month apart in Regina, Saskatchewan, Canada, the two were lifelong friends having grown up together and gone to the same schools. Both enlisted in the Royal Canadian Air Force shortly after their 18th birthdays in July and August 1941. Despite enlisting and being sent overseas at different times, they ended up on the same course at 22 OTU. On 14 December 1942 they were both part of a five-man crew on a training flight, with Robert at the helm. They were on the return approach to the airfield when their Wellington bomber stalled. Harold Parkes, a resident of the nearby village of Alveston described what happened in a letter to Roberts’ parents:

“…the plane [was] losing height and making straight for our houses when, at the last moment, it turned most definitely in order to avoid the houses, with the certainty of a hopeless crash. That is why I am writing to you, as all our people who saw it are convinced that your hero son sacrificed himself to save others.”

Robert was killed as a result of the crash, while Russell was taken to hospital but died of his injuries later that evening. Their three crew mates, including two British airmen and a fellow Canadian Lawrence Edly Lasby, also from Regina, were also killed as result of the crash. All three Canadian airman were buried together in Stratford-upon-Avon Cemetery a few days later. 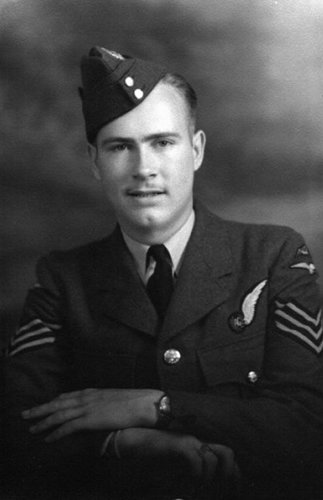 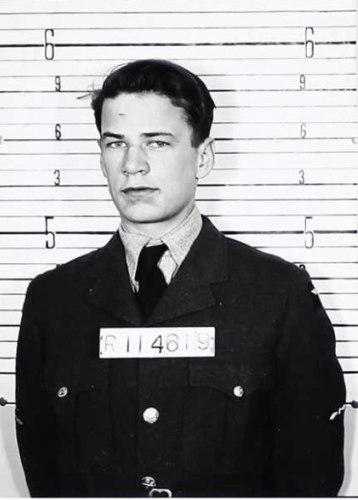 This cemetery managed by Stratford-Upon-Avon Town Council and before visiting we recommend you consult their website for up to date information.