The Hollybrook Memorial commemorates almost 1,000 servicemen of the army and air forces who died in seas around the United Kingdom during the First World War and have no known grave. Amongst the names are hundreds of South African Native Labour Corps volunteers and Field Marshal Lord Kitchener, Secretary of State for War.

Hollybrook Cemetery, which contains the Hollybrook Memorial, is situated close to Southampton University Hospital which lies to the north of the port city of Southampton, the principal port of embarkation for British forces during the First World War. After the First World War, it was decided that the war memorial to commemorate those servicemen of the army and air forces who died in seas around the United Kingdom during the First World war and have no known grave would be built here. One of the largest groups commemorated here are the men of the South African Native Labour Corps who died when their transport ship sank off the Isle of White. Within the cemetery are the graves of more than 370 First and Second World War service personnel.

Hollybrook Cemetery was established in 1913 for the burials of the residence of the burgeoning city of Southampton. During the First World War, Southampton was Britain’s busiest port and military hospitals were established in the university buildings, in the Highfield Institution and at Shirley Warren - today Southampton University Hospital. Hospital ships regularly docked at Southampton bringing sick and wounded men from the Western Front and further afield. The first military burial at Hollybrook cemetery took place in March 1916, and there are now a total of 125 burials from the First World War in Plot 1. 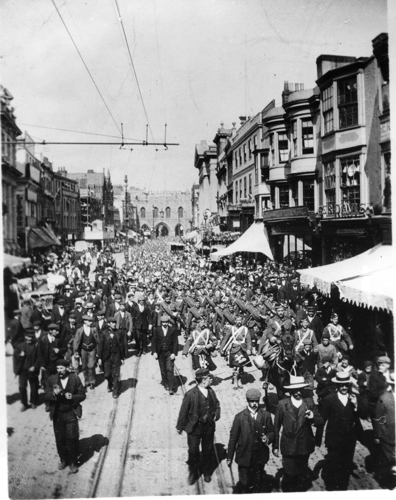 A battalion of the Argyll and Sutherland Highlanders marching through Southampton, 1915. © Southampton City Council

Within Plot 1 also stands the Hollybrook Memorial, which commemorates by name almost 1,900 servicemen and women of the Commonwealth land and air forces who were lost at sea when transports or other vessels were torpedoed or mined in British coastal waters. Naval personnel who were lost at sea and have no known grave are commemorated on the Chatham, Portsmouth and Plymouth memorials, while Merchant seaman are commemorated on the Tower Hill Memorial in London.

Southampton was chosen as the location of the memorial as it was the principal port of embarkation for British forces during the war, meaning most servicemen would have sailed from here. For those who were lost at sea and would never return, the memorial symbolically brings their names back home to Britain. 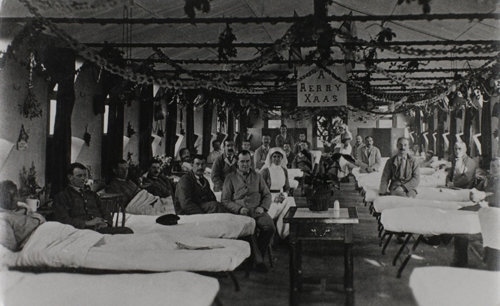 A ward in the Highfield Institution, Christmas 1917. © University of Southampton

Many of the names on this memorial are of non-British servicemen, with almost one-third of those being men of the South African Native Labour Corps, who died when the troop transport Mendi sank in the Channel following a collision on 21 February 1917. Included in their number is Chaplin the Reverend Isaac Wauchope Dyobha. Survivors recounted in his final moments he exhorted to his fellow countrymen:

"Brothers, we are drilling the death drill. I, a Xhosa, say you are my brothers. Zulus, Swazis, Pondos, Basothos and all others, let us die like warriors. We are the sons of Africa. Raise your war cries my brothers, for though they made us leave our assegais back in the kraals, our voices are left with our bodies." 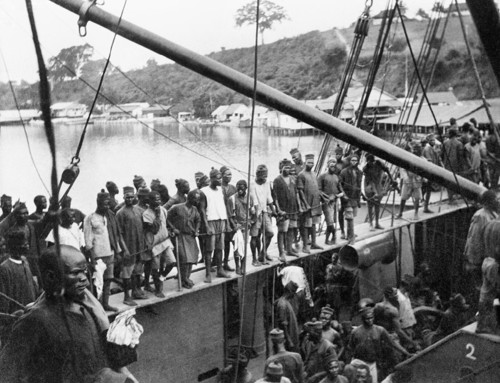 Also named on the memorial is Field Marshall Lord Kitchener, Secretary of State for War, who died when the battle cruiser HMS Hampshire was mined and sunk off Scapa Flow on 5 June 1916.

During the Second World War, 4.5 million tons of military equipment passed through Southampton docks and parts of the prefabricated harbours used at Arromanches during the Normandy invasion were made there. There are a further 188 Commonwealth servicemen of the Second World War buried in the cemetery in a separate plot in Plot 12, some way away from the Memorial. In addition, there are two Dutch, two French, sixty German, one Norwegian and two Polish servicemen buried in the cemetery.