The men of the Royal Navy’s Fleet Air Arm braved hostile seas and skies during the Second War World. The war memorial at Lee-on-Solent in Hampshire commemorates over 1,900 service personnel of the Fleet Air Arm who died across the globe and who have no known grave.

Standing on the Hampshire coast looking out across the Solent towards the Isle of Wight, the Lee-on-Solent Memorial bears the names of over 1,900 servicemen and one woman of the Royal Navy’s Fleet Air Arm who have no known grave. They flew fighters, torpedo bombers and reconnaissance aircraft or served as groundcrew; engineers, mechanics and fitters who repaired, refuelled and rearmed the aircraft. They died in operations across the globe, serving alongside the sailors of the Royal Navy and Merchant Navy in almost every theatre of the Second World War.

The history of naval aviation actually predates the First World War, but it was during the Second World War that naval air power became the key weapon for domination of the seas. 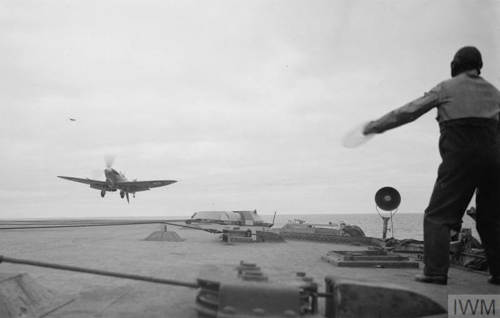 A Supermarine Seafire landing on the flight deck of HMS VICTORIOUS. © IWM A 9728

By the end of the First World War the Royal Navy were working to convert older battleships and had placed orders for new ships to be built for the sole purpose of carrying aircraft at sea. During the Second World War the aircraft carrier surpassed the battleship as the dominant weapon at sea. For the Royal Navy it was the men of the Fleet Air Arm who piloted the fighters, bombers and reconnaissance aircraft which gave the carriers their power. The Fleet Air Arm aircraft guarded the ships of the fleet, engaged the enemy on land and sea, and scouted for the hostile submarines and surface vessels. 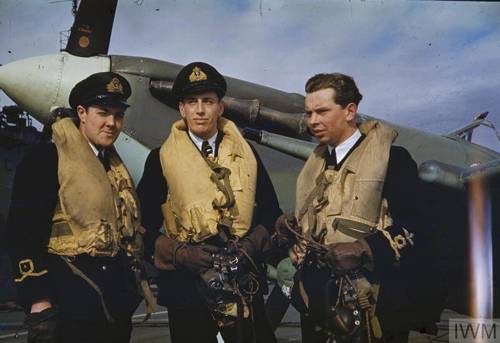 Three pilots of the Fleet Air Arm pose for a picture in front of a Supermarine Seafire aboard their aircraft carrier. © IWM TR 1121

Alongside their sailor colleagues the men of Fleet Air Arm served in almost every theatre of the Second World War. They supported the land operations in France in 1940, and following the Dunkirk evacuation they bolstered the depleted forces of the Royal Air Force in the defence of Britain during the Battle of Britain.

In the Mediterranean they supported ground forces in Greece, North Africa and Italy, and provided vital air cover to convoys bound for the fighting fronts and the besieged island of Malta.

Sea Hurricanes of the Fleet Air Arm on the deck of HMS Victorious on route to Malta during Operation Pedestal, the greatest supply convoy of the war. In the background can be seen, HMS Indomitable and HMS Eagle. Eagle was lost soon after this photograph was taken © IWM A 15960

In November 1940, Swordfish biplanes of the Fleet Air Arm carried out a daring night raid on Italian warships harboured at Taranto, crippling several powerful Italian ships. The operation was carefully studied by the Japanese military who went on to launch their own carrier-based air attack against the American Pacific Fleet at Pearl Harbour a year later.

In the Atlantic, aircraft of the Fleet Air Arm harried the German surface fleet and were heavily involved in the sinking of the German battleship Bismarck in May 1941, and Tirpitz, in November 1944. They also escorted convoys of merchant ships, protecting them from German U-boats during the Battle of the Atlantic. 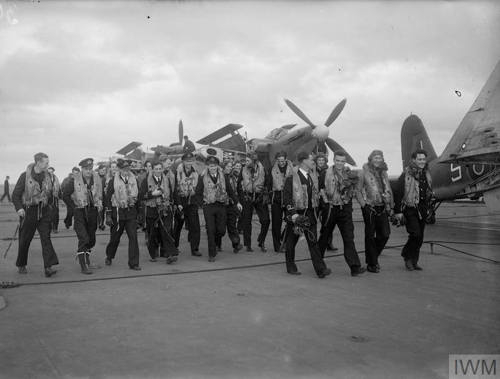 Fleet Air Arm Barracudas and Corsair pilots aboard HMS Formidable after a raid on the German Battleship Tirpitz, August 1944 © IWM A 25454

In the Far East in 1945 the Fleet Air Arm were involved in the final operations against Imperial Japan, striking at the oil fields in Sumatra and attacking shipping and land targets on the Japanese mainland. 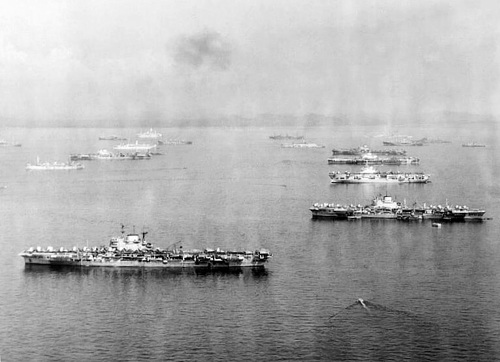 Serving with the Fleet Air Arm came with many dangers. They faced all the dangers associated with war time service at sea and in the air, with the added danger of flying from an airfield that was pitching and rolling and forever on the move in the endless ocean. Over 3,300 service personnel of the Fleet Air Arm died during the Second World War, more than half have no known grave. Many were lost when their aircraft carriers were sunk or having been shot down crashed into the sea, others made navigational errors and were never seen again.

The rapid increase in the number of aircraft carriers in the Royal Navy during the war created a great need for pilots and aircrew. In 1942, New Zealand was invited to recruit personnel for the Fleet Air Arm and New Zealanders would make up 10% of aircrew during the war. Those who died and have no known grave are commemorate the CWGC’s New Zealand Naval Memorial in Devonport, Auckland, New Zeeland.

Amongst the 1,900 names listed on the Lee-on-Solent Memorial is that of 23-year-old 3rd Officer Thelma Daphne Jackson of the Women’s Royal Naval Service, the only woman commemorated on the memorial. She was killed in the same incident which also took the life of her husband, 22-year-old Sub-Lieutenant Arthur Myles Jackson, as well as Sub-Lieutenant Eric Fretwell. On 23 July 1944, all three took off from Perranporth in Cornwall in a Swordfish torpedo bomber piloted by Fretwell. The exact circumstances of their deaths are not known, but they never reached their destination. No wreckage was ever located, but it is likely that they crashed into the sea due to mechanical trouble.

As the principal base of the Fleet Air Arm, Lee-on-Solent in Hampshire was the obvious location for the memorial to the over 1,900 men and women of the service who died during the Second World War and have no known grave.

The memorial was constructed on land owned by the Air Ministry, taking in a section of the Officer’s garden in the Royal Naval Barracks that existed there.

Drawing of the proposed location for the Fleet Air Arm Memorial, Lee-on-Solent on the shorefront. In the end this site was not chosen. The actual location chosen for the memorial can be seen on the left, on the corner of Richmond Road and Marine Parade West.

Other locations were also considered, including one at a more prominent site on the shorefront. This was quickly discounted however as it was recognised that the whole foreshore was subject to erosion and it was likely that protective measures such as a sea-wall might need to be constructed in the future, which would have a serious impact on any memorial sited there.

Another site near the landing ground was also considered but quickly ruled out as it was on land with no public access and: 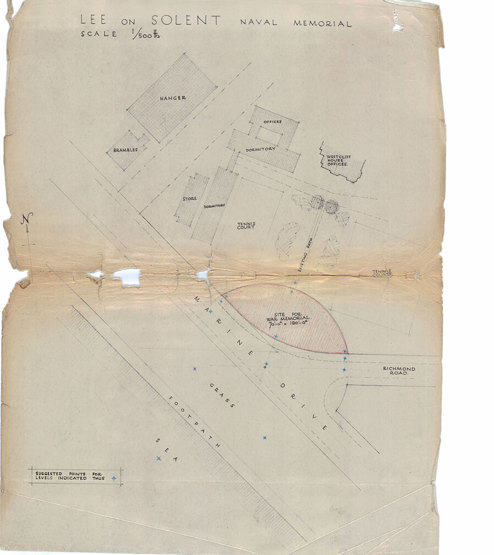 Although the Commission believed the site for the memorial’s construction had now been fixed, problems began to appear from an unexpected source.

Both the Flag Officer and the Commodore of the Royal Naval Barracks at Lee raised a protest against the proposed memorial.

The Flag Officer, Rear Admiral Sir Thomas Troubridge, was not convinced about the entire proposal for the memorial as he considered that “brick-and-mortar memorials are now out of date”, and questioned whether money should be spent on such a memorial which “in his view and that of many others was out of keeping with the times” 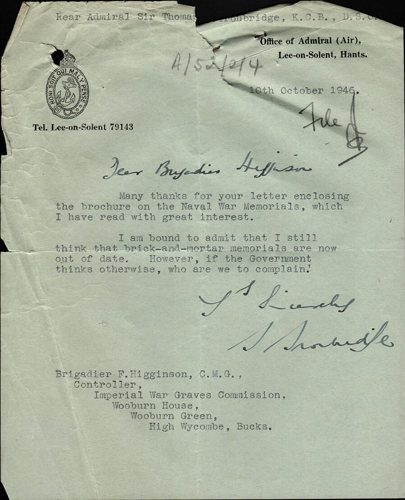 At the same time, the Commodore raised objections to the memorial believing that it would “represent a serious encroachment into the grounds of the Officer’s gardens”.

Such objections caused some difficulty for the Commission at first, since it was considered vital by the Admiralty that the memorial have support from the local command. In the end however, it appears that much of the objections was the result of confusion about the size of the memorial proposed, with the Commodore believing that Commission were intending to erect a memorial of similar size to the ones at Chatham, Portsmouth and Plymouth. Once this misunderstanding had been cleared up, no further objections regarding the site were raised.

The Lee-on-Solent Naval Memorial, like the naval memorials in Liverpool and Lowestoft, was designed through a public competition open to all registered architects who had served in H.M. Forces.

The Commission approved the suggestion for a competition at their 286th Meeting in November 1946, where Sir Frederic Kenyon, the Commission’s artistic adviser, explained that it was hoped that the competition would 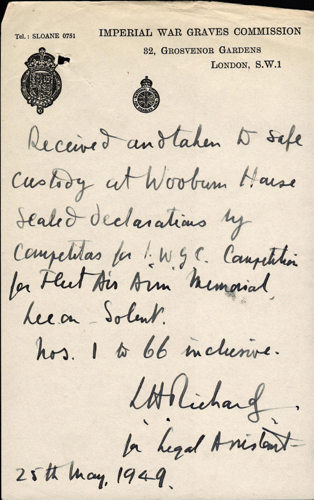 Handwritten note from Lionel Henry Richards, Legal Assistant, IWGC, confirming safe receipt of the sealed declarations from the 66 entrants of the design competition of the Lee-on-Solent Naval Memorial

The CWGC took the administration and judging of the competition incredibly seriously – the 66 submitted designs were anonymised and kept in a locked room to which only the competition judge Sir Edward Maufe, and the Commission’s Senior Deputy Director of Works, Henry John Brown, had access to. 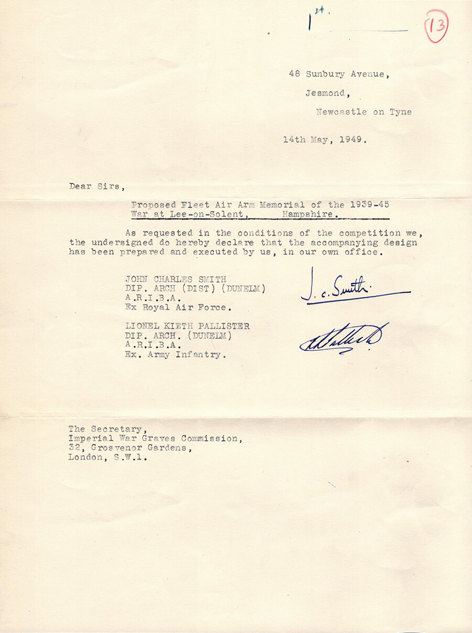 Following assessments of all the entries, the design by John Charles Smith and Lionel Keith Pallister was chosen in June 1949, with Maufe commenting that the design presented “a quiet, dignified and practical scheme”. 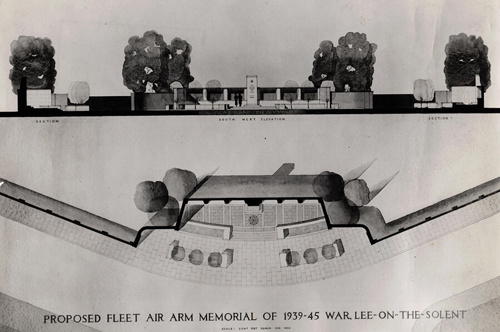 Interestingly, another design which was commended by Maufe had been submitted by the architects Stanley H. Smith and Charles Blythin, who had already been successful with their design entry for the Liverpool Naval Memorial

Construction of the memorial did not commence until 1951, and, was undertaken by the building firm E.H. Burgess Ltd., at the cost of some £6,000. 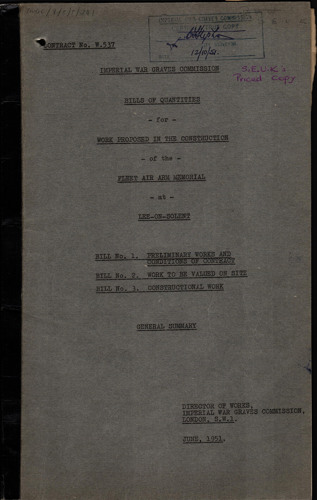 Bills of Quantities for work proposed at the Fleet Air Arm Memorial at Lee-on-Solent, June 1951

The finished memorial consisted of Portland stone with green slate panels inscribed with the names of the missing.

The finished design also included a compass mosaic in the paving, complete with a naval anchor. 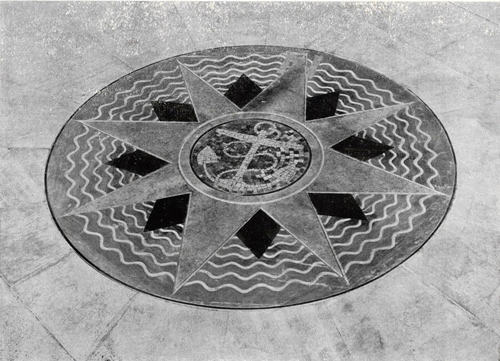 While the memorial was completed in 1952, last minute changes and corrections to the names engraved on the panels were occurring right up until its unveiling in 1953, as these letters concerning Lt. Richard Lawson Williamson show. 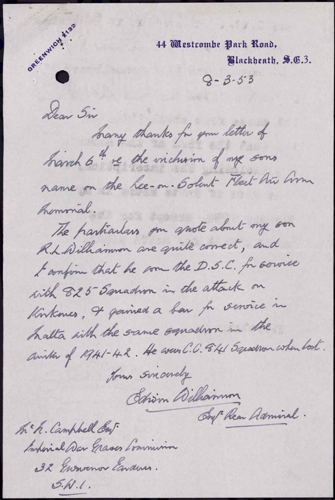 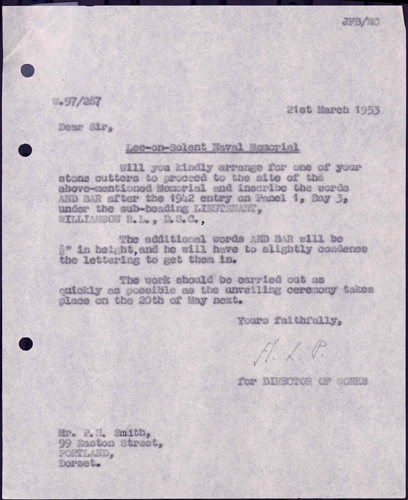 Letters regarding the addition of a Bar to Lt. Williamson’s Distinguished Service Cross entry on the Lee-on-Solent Memorial

The memorial was unveiled on Wednesday 20th May 1953 by the Duchess of Kent. The unveiling ceremony was attended by an estimated 2,200 relatives.

A detailed plan and timetable were created for the ceremony and included a fly-past by a naval jet aircraft. 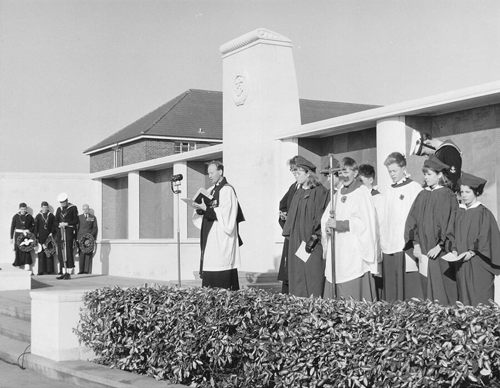 Service at the unveiling of the Lee-on-Solent Memorial, 20th May 1953

This Memorial is located on the main sea front, sited on Marine Parade West, approximately half a mile west of the town centre.