One of the three great naval war memorials built by the CWGC commemorate the missing of the royal navy from the two world wars. Here at Portsmouth are named over 24,000 service personnel who have no grave but the sea.

More than 45,000 men and women died while serving with the Royal Navy during the First World War. The majority were lost at sea and had no known grave. A fitting way to commemorate them was needed.

When someone joined the Royal Navy, they were allocated to a particular ‘manning port’ for administrative purposes. The Admiralty and the Commission decided that the three manning ports in Great Britain - Plymouth, Chatham and Portsmouth - should each have an identical war memorial to bear the names of their naval personnel with no grave but the sea. The Commission built unmistakable obelisks which would be seen by all vessels using these ports, keeping the dead in daily view.

Only fifteen years after these were unveiled, the Navy was called upon to fight another global war. Hundreds of thousands of men and women joined up, and almost 60,000 naval personnel died in service between 1939 and 1945. The existing war memorials were extended to accommodate Second World War dead, and today the Portsmouth Naval Memorial commemorates by name over 24,500 Commonwealth naval servicemen and women – over 9,600 of the First World War and nearly 15,000 of the Second.

When war broke out in August 1914, Britain and her war effort depended on the strength of the Royal Navy. Over the course of the next four years, Royal Naval personnel from Britain and her Empire played an active and vital role in the Allied war effort and suffered significant casualties across the globe. They blockaded German shipping lanes and fought major naval actions off the coast of Chile and at the Falkland Islands in 1914, and in the North Sea in 1915 and 1916. The Royal Navy also provided the army with crucial support during the Dardanelles Campaign in 1915 and, throughout the war, protected Allied troop transports and merchant shipping by escorting convoys, facing a new and deadly effective weapon: U-boats with torpedoes. 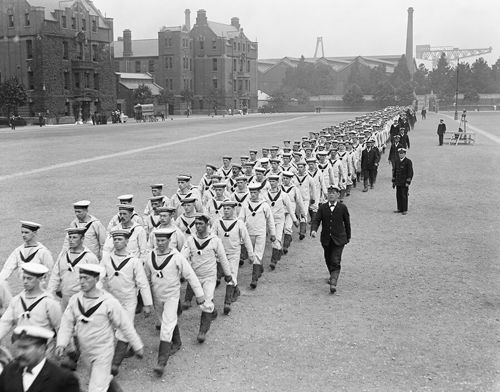 The largest naval action of the war, the Battle of Jutland, saw the British Grand Fleet and the German High Seas Fleet clash off the coast of Denmark on 31 May-1 June 1916. The battle raged over 72 hours, engaging over 100,000 British and German naval personnel in 250 ships. In total, over half of all British personnel lost at Jutland, some 3,400 men, are commemorated here at Portsmouth. This includes most of the crews of HMS Queen Mary, Invincible and Black Prince. 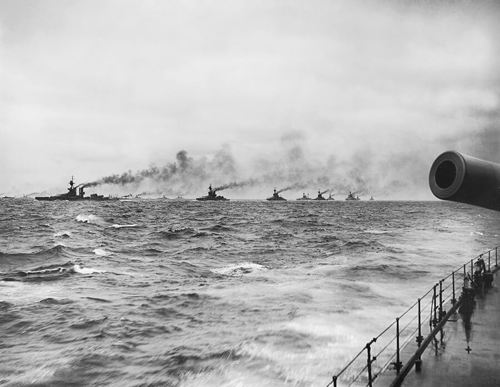 Battleships of the British Grand Fleet cruising in line in the North Sea on the eve of the Battle of Jutland, May 1916. IWM Q 18121

Queen Mary was exchanging fire with the German battlecruisers Seydlitz and Derfflinger when her magazine exploded. 1,268 members of crew were lost, of whom 1,081 are commemorated here. Invincible, the first battlecruiser in the world, led the 3rd Battlecruiser Squadron at Jutland. During a close encounter with German battleships, a shell struck a gun turret and ammunition magazine. The ensuing explosion broke the ship in half. Admiral Hood, Captain Cay, and 879 members of crew of the 1,021 lost that day are commemorated here. 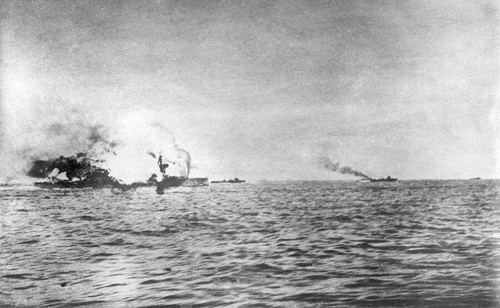 In the Second World War, the navy again protected vital convoys of food, supplies and Allied troops, and engaged the enemy at sea. Manpower strength rose from just 129,000 in the 1930s to over 860,000 by 1945. Men and women from across Britain and the Empire served in a wide variety of roles and vessels, from converted fishing trawlers to submarines, immense battleships and aircraft carriers, and in shore establishments.

No major fleet actions like Jutland occurred between British and German navies, but there were numerous encounters between vessels. On 24 May 1941 the pride of the British fleet, HMS Hood, was sunk by the German battleship Bismarck and cruiser Prinz Eugen at the Battle of Denmark Strait while attempting to prevent German ships from reaching the open Atlantic. 1,415 men, including Admiral Holland and Captain Kerr were lost: the largest loss ever on a Royal Navy ship. 1,384 of her crew are commemorated here. 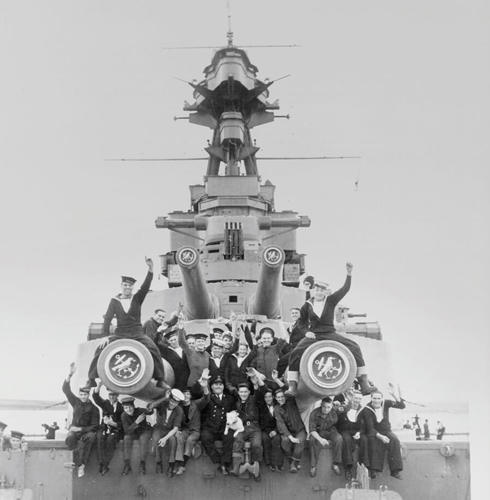 Whether patrolling British coastal waters, attacking Axis submarines and shipping, taking part in seaborne invasions such as the Normandy landings, or escorting merchant vessels through the Arctic or across the Atlantic, men at sea lived with the constant threat of a torpedo strike. Over one third of those commemorated on the Second World War panels at Portsmouth lost their lives when their ships were attacked by U-boats. Just six weeks after war was declared, the battleship HMS Royal Oak was torpedoed in Scapa Flow. 834 men, including Captain Benn, were lost, of whom 785 are commemorated here. Such a significant loss of life, in home waters and just six weeks into the war, came as a major blow to the Royal Navy, and to over 30 Portsmouth families who lost a husband, or a son. 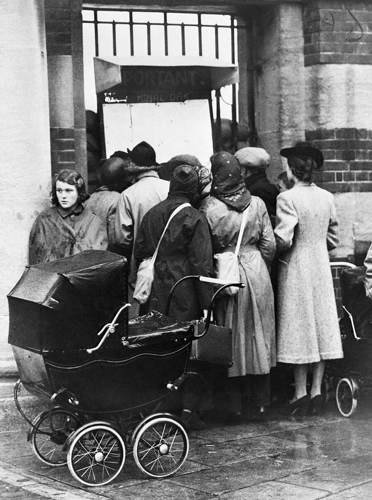 The Memorial is situated on Southsea Common overlooking the promenade, and is accessible at all times. A copy of the Memorial Register is kept at the Civic Offices in Guildhall Square and may be consulted there.

The names of the First World War missing can be found around the base of the obelisk, while the Second World War names are on the memorial wall beneath. The names on both parts of the memorial are arranged by year of death, rank and then alphabetically by surname.