Join us as we spotlight the massive contribution made by South Asian service people during the World Wars in honour of South Asian Heritage Month.

Hundreds of thousands of people from across South Asia fought and died during the two World Wars. From 1914-1918 close to 1.5 million men from what was then Undivided India served, fighting in all the major theatres of war, from Flanders’ fields in Belgium to modern-day Iraq.

With 2.5 million men, the Indian Army of the Second World War was the largest volunteer army in history. During South Asian Heritage Month, we’re highlighting a number of locations across the UK where those of South Asian heritage are buried or commemorated.

From Pontypool to Plymouth, and from Southampton to Glasgow, you can discover more than 200 war graves and memorials to those from Southern Asia who fought and died serving in the British Imperial Forces in the two World Wars. Scroll down to find more information on some of the key sites commemorating South Asian servicemen throughout the UK.

In the video below, Jay Singh-Sohal, VR, Commonwealth War Graves Foundation Trustee and Army Reserve Captain, reflects on South Asian Heritage Month and the contribution made by South Asians to Britain, today and in the past. In particular, he talks about the important part that South Asians played in both World Wars. Watch the video: 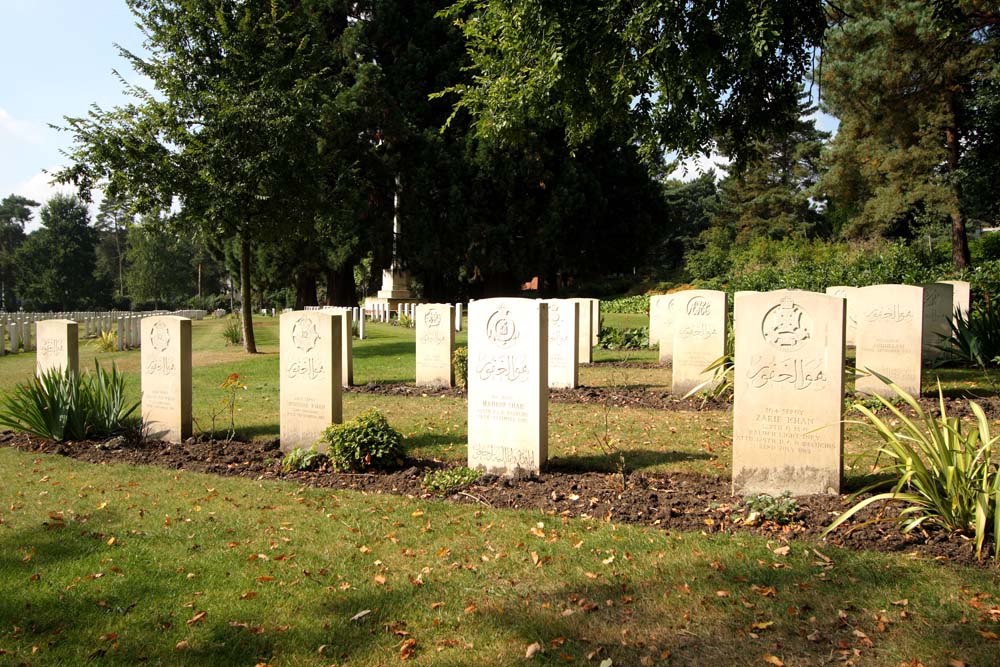 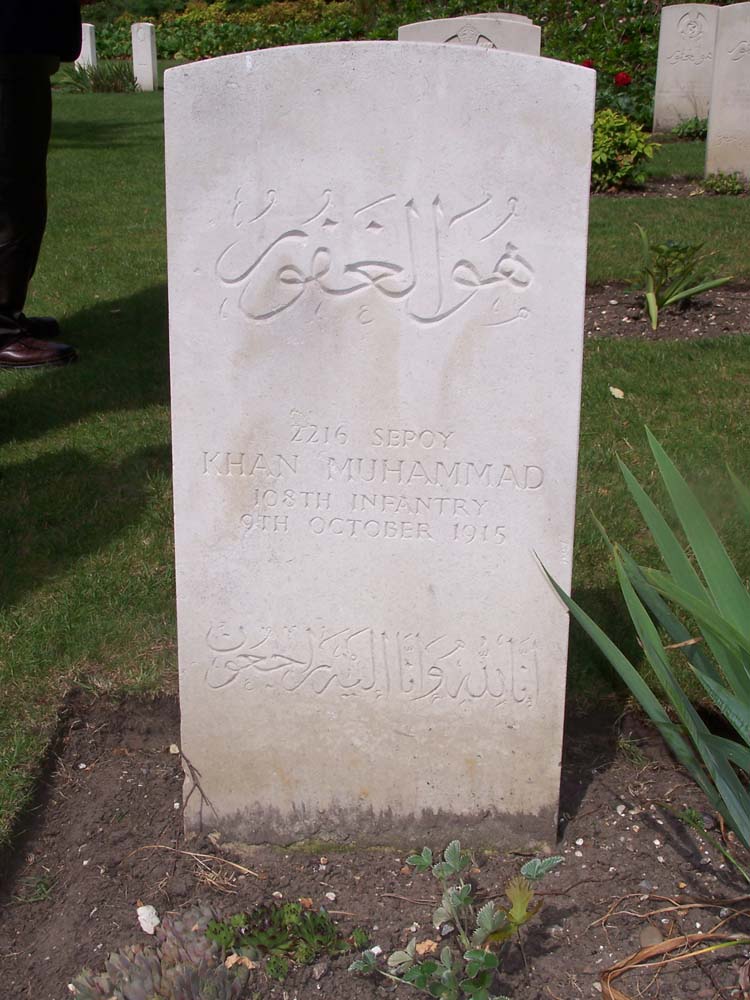 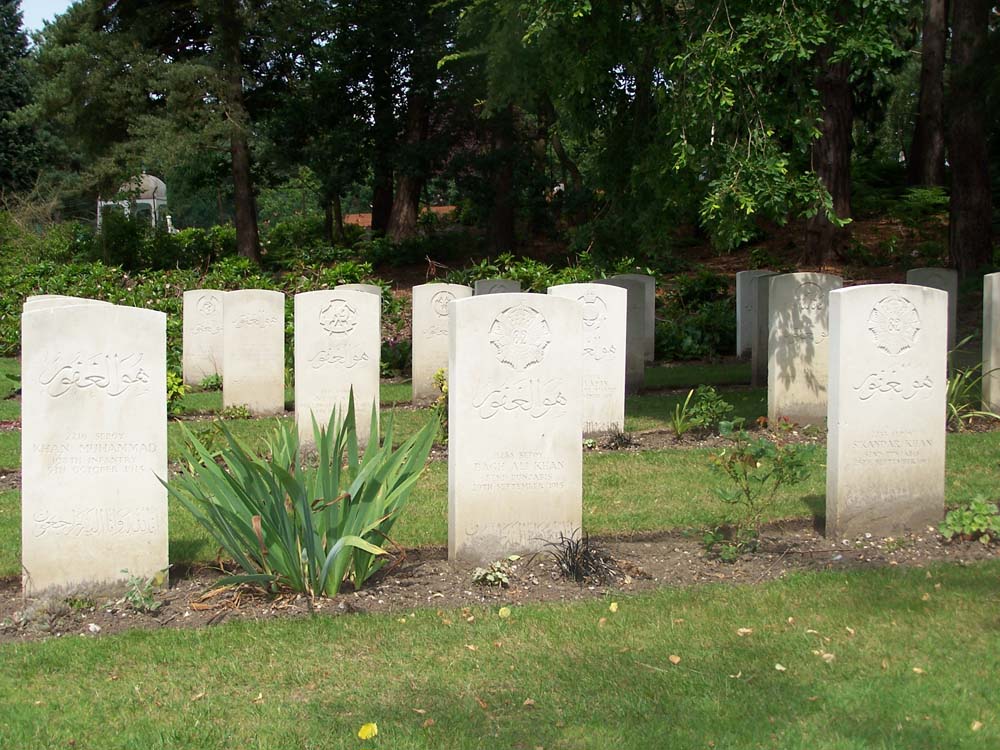 At Brookwood in Surrey, there are more than 50 war graves to soldiers who came from India, Pakistan, and Nepal. 30 of those are in Brookwood Cemetery, where they are buried in the Muslim plot in the North-West corner – the first Muslim Cemetery in Britain. Many of the burials date from the First World War. The first soldier to be buried in this plot was Sepoy Ahmad Kahn of the 3rd Sapper and Miners. He was the son of Sajawulmulk of Thutha-Rai-Bahadur, Kharian, Gujrat, Punjab. He had died of wounds on a hospital ship on the way from France to the hospital at Netley.

In Brookwood Military Cemetery is a plot of 22 Muslim graves which were moved here in the 1960s from the Muslim Burial Ground in Woking. Yousif Ali, from Sylhet, India (now Bangladesh) is buried in this plot. His story can be read via this link 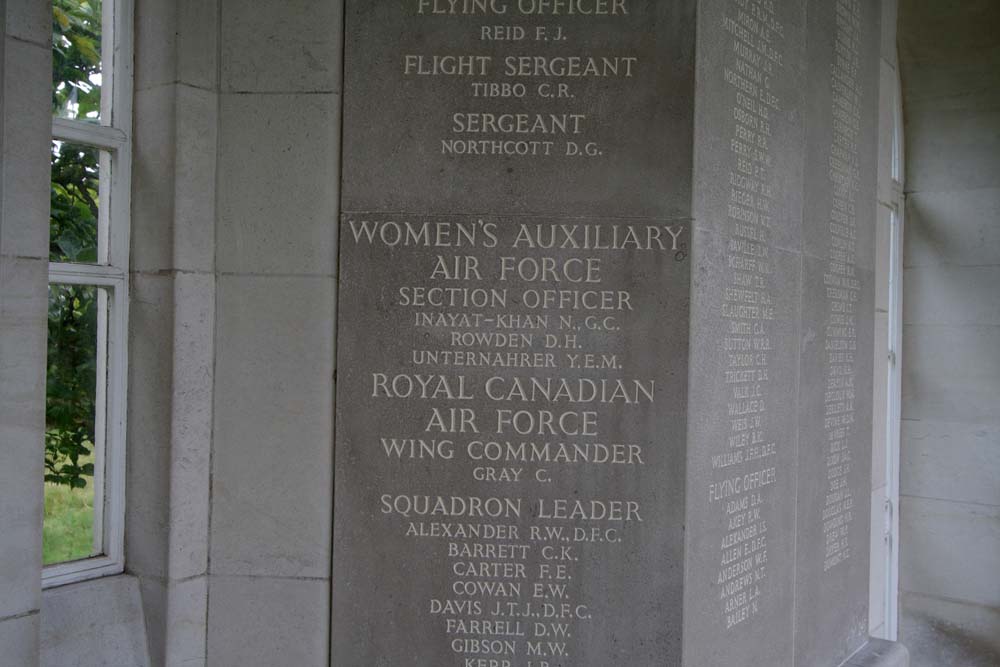 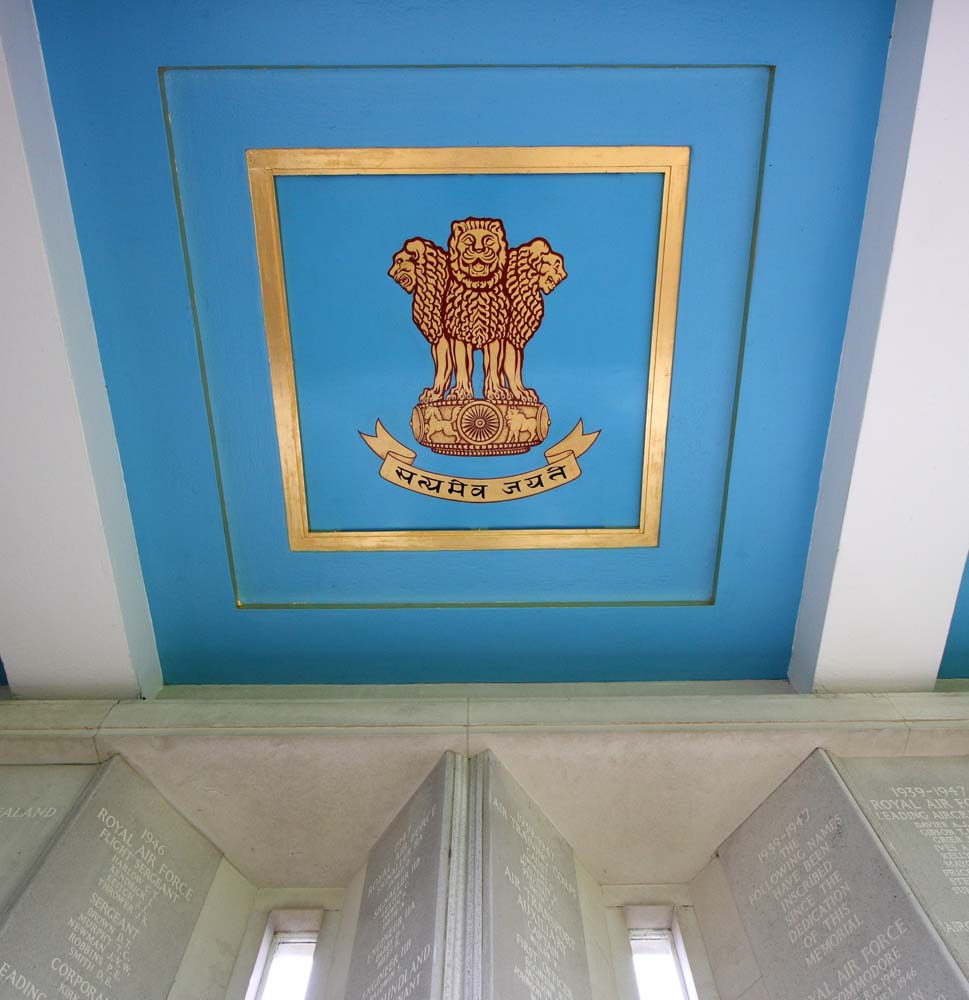 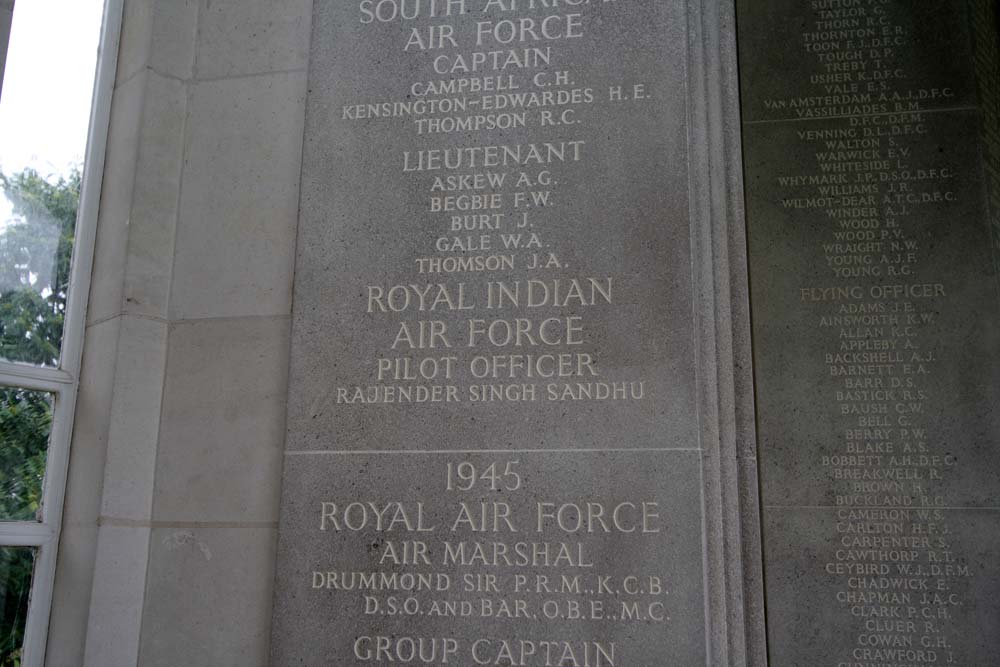 Not far from Brookwood, at the Runnymede Air Forces Memorial, there are at least 8 casualties commemorated who have South Asian heritage One of those is Noor Inayat Khan. Armed with false papers and a pistol, Noor became the first woman radio operator to be sent to Nazi–occupied France as part of the Special Operation Executive.

Elsewhere on the memorial is Pilot Officer Rajender Singh Sandhu who was born in Pakhopur in Amritsar in September 1923. After the outbreak of the Second World War, he joined the Royal Indian Air Force. He was commissioned as a pilot officer in June 1943 and began training to become a fighter pilot. Rajender was nearing the end of his training in September 1944, when he failed to return from a training flight. His Spitfire was later reported to have crashed into the sea. 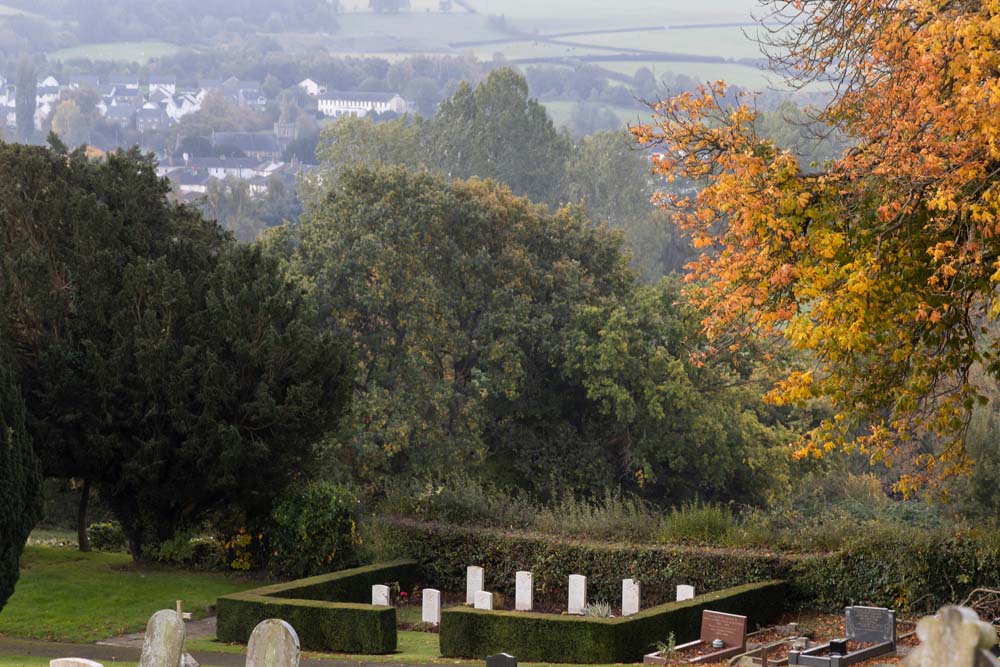 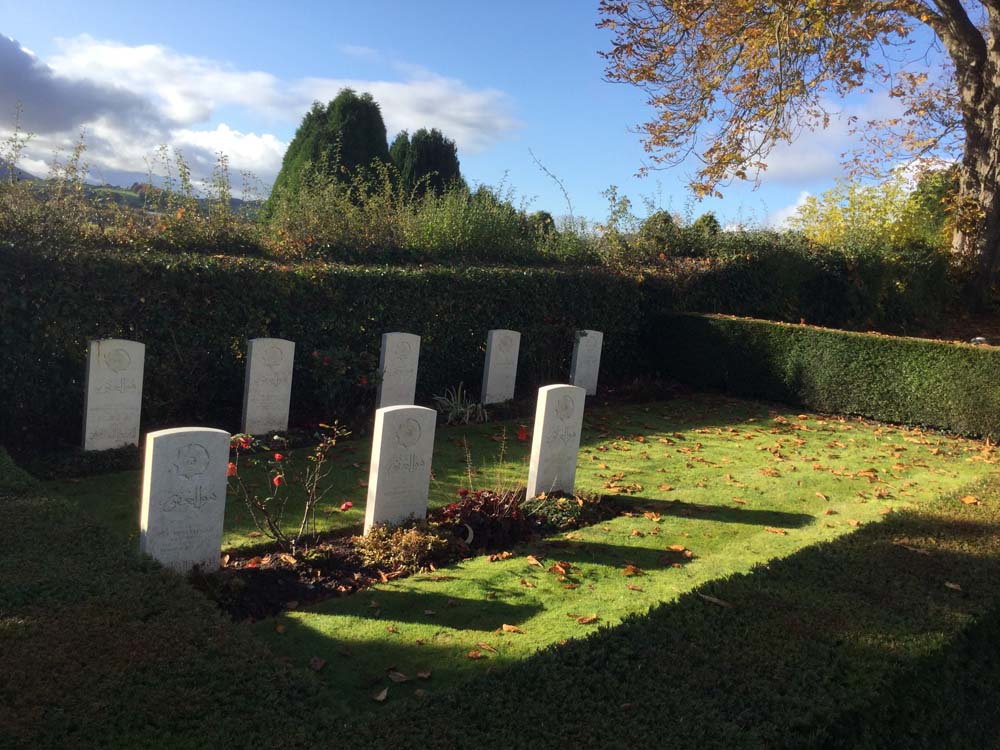 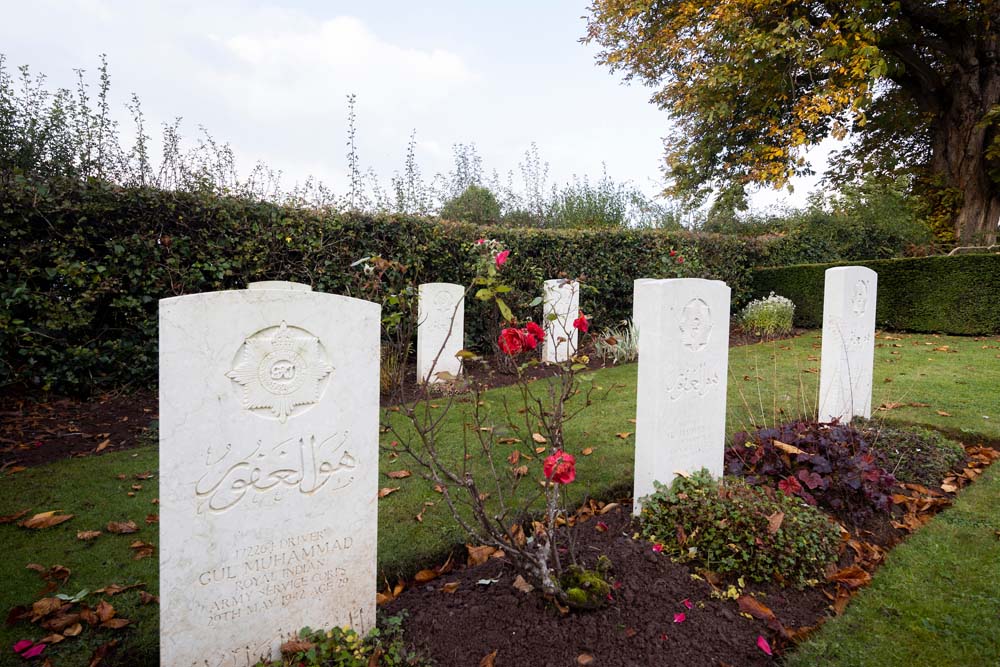 At Brecon Cemetery in Wales, while many of the war graves bear the names like Evans, Thomas, Davies and Williams, in 1941-42, they would be joined by men called Ali and Muhammad. In 1939 British Army planners realised the now completely mechanised army might need some form of animal transport. The best military animal transport available was in the British Indian Army, where it was necessary for areas like the north-west frontier. Force K6 was created with four Royal Indian Army Service Corps (RIASC) animal transport companies and their support units.

After the withdrawal from Dunkirk, the RIASC companies were dispersed around the Brecon Beacons in 1941. All of the men buried at Brecon had served in mule companies, most as drivers. Their average age was 25, and three had wives awaiting their return. The first to be buried here was Muhammad Sarwar of Shahpur in June 1941; the last, Muhammad Din of Gujrat, son of an Imam, in July 1942. All were carefully buried in accordance with Muslim practices.

In June-July 1942, Force K6 left the mountains of Wales for those of Scotland. 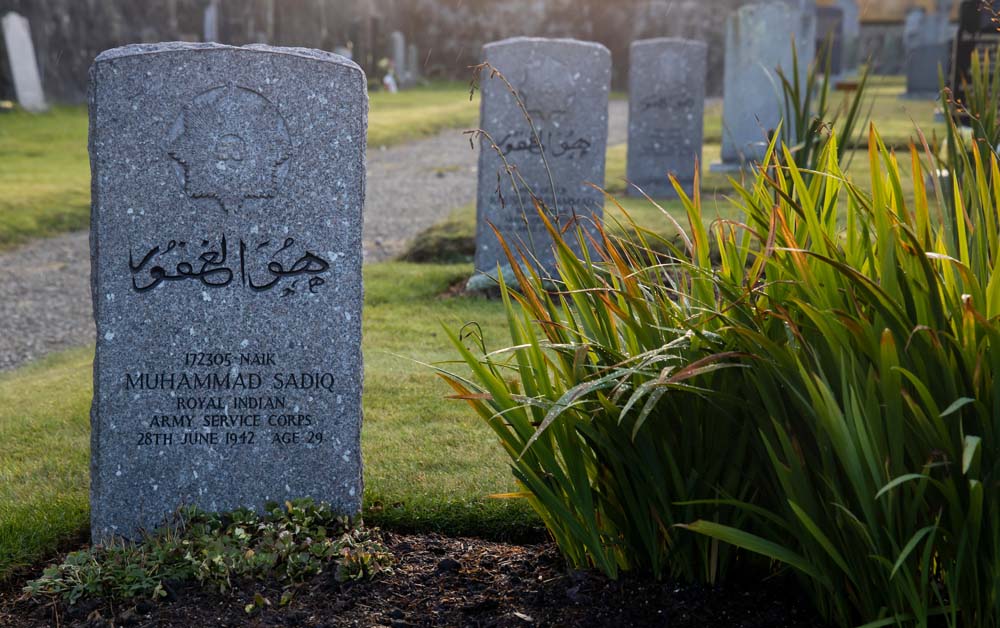 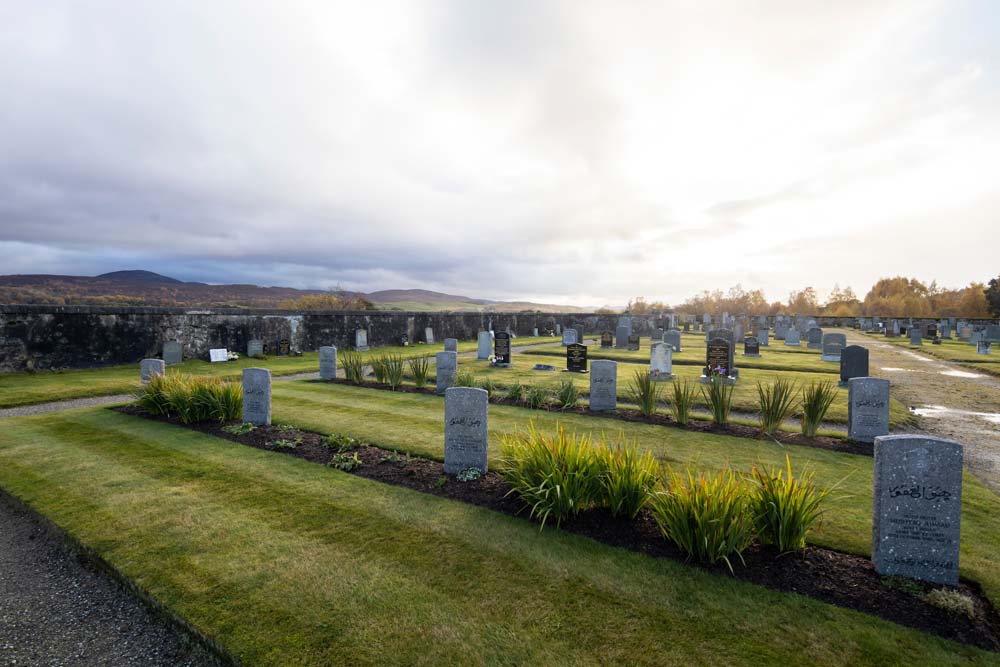 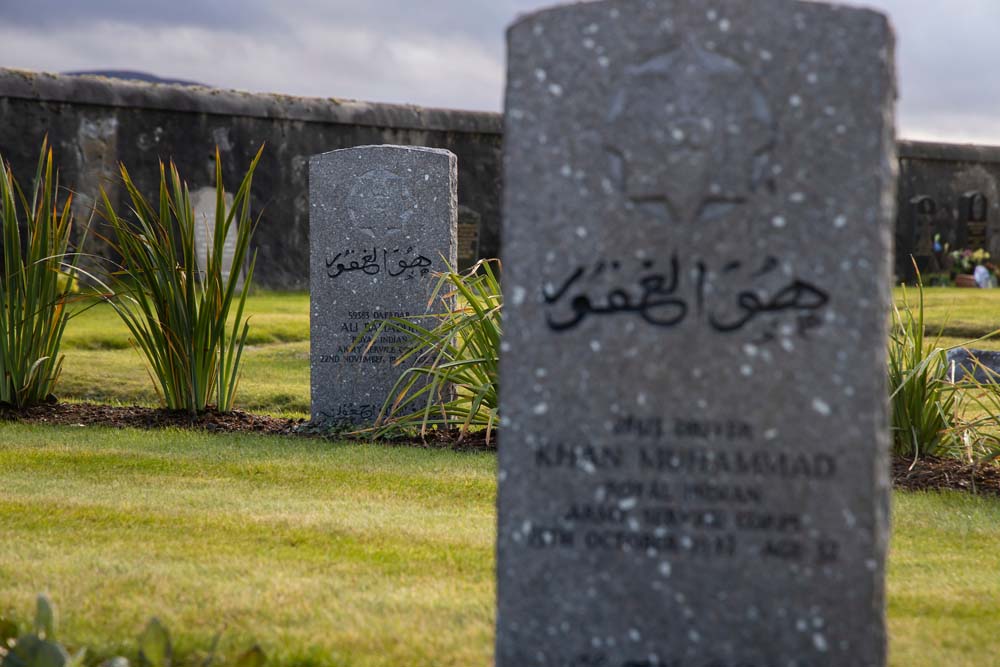 At Kingussie Cemetery, we care for 14 graves of men who died during the Second World War. Two were born in this valley – the rest are thousands of miles from their homes. Nine of those buried here belonged to Force K6 of the British Indian Army.

Most of the RIASC men buried here died of natural causes like infections and tuberculosis, but the first to be buried here - Naik (corporal) Mohammad Sadiq - was shot and killed by a comrade with a grudge against him in camp at Loch Alvie. Driver Khan Muhammad died of exposure during an exercise in the Cairngorms, and Driver Muhammad died of injuries sustained when a truck overturned.

All were carefully buried in accordance with Muslim practices, including the special angle of their graves, allowing them to lie on their right side, facing Mecca.

Patcham Down, near Brighton 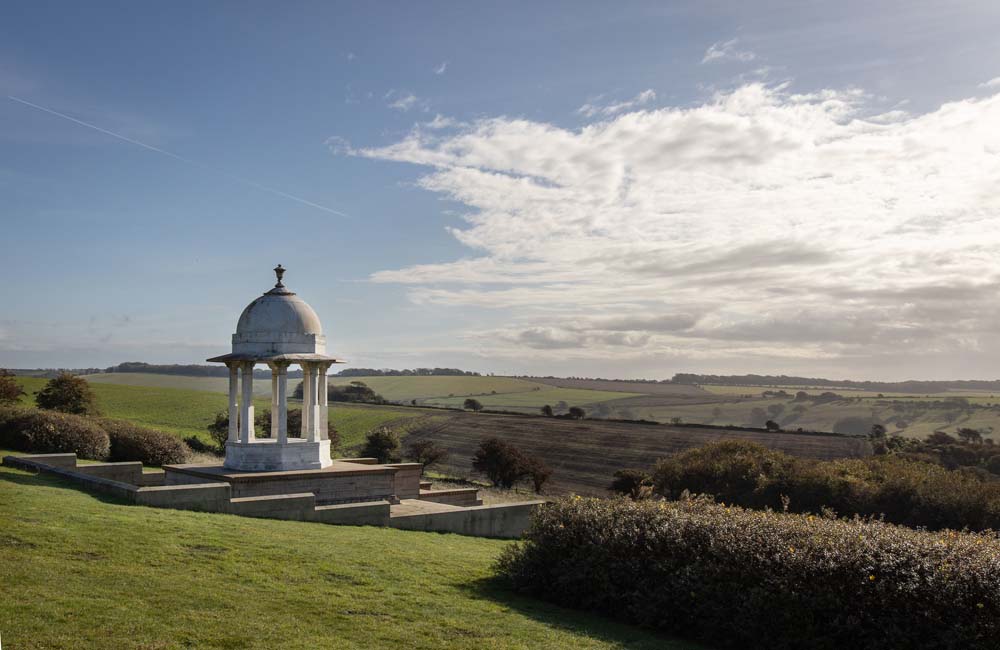 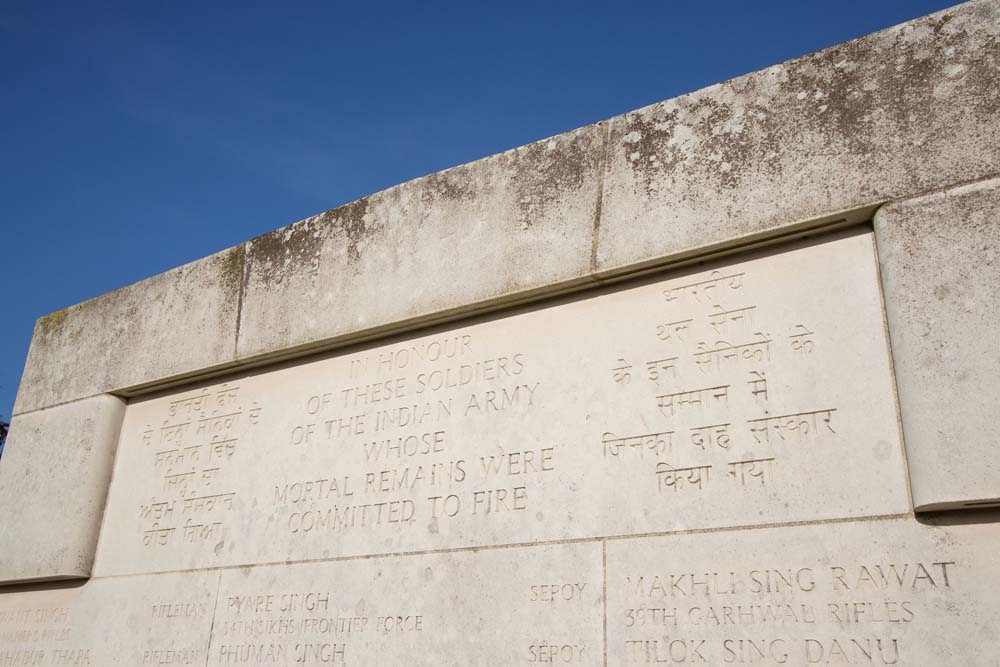 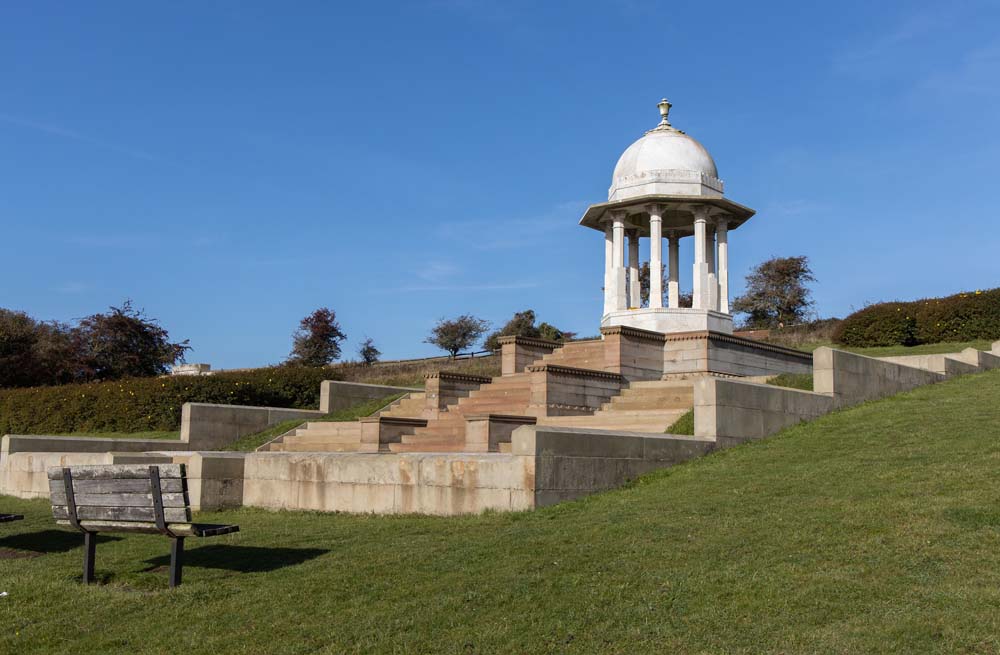 The Patcham Down Indian Forces Cremation Memorial commemorates 53 men of Indian Army who died and were cremated at Patcham Down ghat during the First World War in accordance with Hindu and Sikh religious rites. These soldiers had all been transferred to hospital in Brighton after fighting on the Western Front in 1914/15. The graves of Muslim soldiers who died in Brighton are in Brookwood Military Cemetery, Surrey. The inscription on the memorial, which is written in Hindi, Punjabi and English, reads: "IN HONOUR OF THESE SOLDIERS OF THE INDIAN ARMY WHOSE MORTAL REMAINS WERE COMMITTED TO FIRE" The majority were originally commemorated on the Neuve-Chapelle Memorial in France, which is the memorial for 4,700 soldiers of the Indian Army who died on the Western Front and who have no known grave.

Fourteen of the soldiers were commemorated on the Hollybrook Memorial in Hampshire, which is primarily for the commemoration of soldiers who died at sea. The Commonwealth War Graves Commission decided in 2009 that, although these men did not have graves, they were not 'missing' in the conventional sense and it would therefore be more appropriate to commemorate them on a memorial at the cremation site.

The memorial was designed and built by the Commonwealth War Graves Commission and unveiled on 26 September 2010. The nearby Chattri Memorial was built after the First World War to commemorate all the Indian soldiers who gave their lives in the war and is not a Commonwealth War Graves Commission memorial. The Chattri Memorial was unveiled by the Prince of Wales in 1921 with an inscription that reads: "To the memory of all the Indian soldiers who gave their lives for their King-Emperor in the Great War, this monument, erected on the site of the funeral pyre where the Hindus and Sikhs who died in hospital at Brighton, passed through the fire, is in grateful admiration and brotherly affection dedicated."

Check out the video below to learn more about Patcham Down and the casualties commemorated with Public Engagement Coordinators Will Reid and Sarah Nathaniel.

You can learn more about all of the casualties we commemorate and the cemeteries and memorials we maintain around the world right here on our website.

Our Find War Dead tool allows you to search through all of our records, including those South Asian troops in our care.

Simply select "India" from the "Served with (country)" option to find them. Use our other fields to refine your search.

To find local cemeteries and memorials, or to search our database of worldwide sites, use our Find War Memorials & War Cemeteries tool.